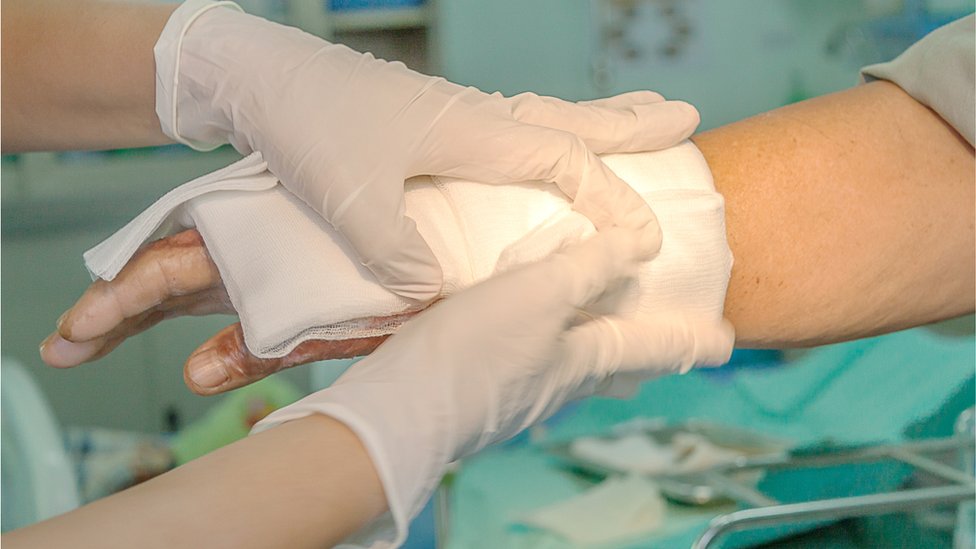 Chronic wounds are a debilitating medical condition for affected individuals and represent a significant financial burden for the healthcare system, whether they are caused by venous insufficiency, peripheral artery disease (PAD) or diabetes. However, due to their aetiology they require different treatment approaches, which may be complementary only to a limited extent or even be entirely mutually exclusive.

Chronic wounds are generally characterised as wounds that do not heal in a predictable amount of time, anywhere from 4 weeks to 3 months (there is no consensus), and vary greatly in prevalence, between the types of wounds, and regionally [1]. We will limit ourselves to lower-extremity wounds (ulcers) as they are the main topic of this post. Most of them (72%) are caused by chronic venous insufficiency (CVI), followed by arterial insufficiency ulcers (ischaemic ulcers), which represent 10–30% of all cases and neuropathic ulcers that comprise 15–25% of all lower-extremity ulcers [2].

Ulcers might also be of lymphatic or infectious aetiology, but they are identified only in a very small number of cases: one study found that only 2.5% of all patients with lower-extremity ulceration had lymphatic ulcers [3]. A careful reader will note that there is certain amount of overlap between the presented prevalence percentages, but it should be kept in mind that a notable number of patients may have ulcers of mixed aetiology [3]. This further complicates treatment, especially in individuals with comorbid CVI and (severe) PAD with associated additional complications like critical limb ischaemia (CLI), which precludes the use of classical compression therapy—a staple method in conservative treatment of venous ulcers [4]. However, CLI and associated symptoms can be successfully managed with the use of intermittent pneumatic compression [5].

Lower-leg ulceration of any aetiology is a relatively uncommon medical condition by itself in comparison with, for example, gout (estimated global prevalence of up to 10%), if we limit ourselves to podiatric issues, or, venturing in cardiovascular diseases (CVDs), coronary artery disease (CAD), which is one of the most common cardiovascular issues and the leading cause of death worldwide (9.43 million deaths in 2016) [6, 7, 8]. Prevalence rate estimates for open lower-limb ulceration range from 0.12% to 1.1% of the population, while rates of open and healed ulcers are higher and go up to 1.8% [9].

However, low prevalence is well compensated by the significant morbidity and high cost of treatment. Patients with lower-extremity ulceration face significant psychosocial issues, including depression and anxiety (in comparison with healthy counterparts) [10]. The economic impact is also significant, particularly for arterial wounds: a study conducted in the USA on the costs of chronic wound treatments in Medicare patients in 2014 revealed that on average the treatment of arterial ulcers cost $9105 per patient [11]. The same study found that treatment of venous ulcers cost significantly less, $1252 per patient [11]. Still, given their higher prevalence, the costs can add up: it is estimated that the treatment cost of CVI and associated ulcers is in the ballpark of $1 billion in the United States and between £400 and £600 million in the UK [12].

Treatment methods themselves vary greatly for different types of ulcers and between ulcers of the same aetiology, usually depending on severity (ulcers and underlying pathophysiology) and potential comorbid conditions (e.g., diabetes) that have additional detrimental effects on wound healing. Focusing just on conservative treatments, one of the most well-known methods is compression therapy, which is a staple in management of venous ulcers, but can even be suitable, under certain conditions, for treatment of arterial and neuropathic wounds and ulcers of mixed aetiology.

Why is proper compression therapy important for effective wound treatment?

Stockings, bandages, and Unna boots are most prescribed for the treatment and management of venous ulcers since they are effective in aiding venous return (VR) and facilitating more efficient pumping of blood back to the heart, reduce pain and oedema and have a preventive effect on the recurrence of ulcers, but they are not without drawbacks. The application of bandages, for example, is a complex procedure, subject to the size, shape and physical structure of the affected lower limb, the type of bandages/material used, the amount of layering, etc., and predicated on the skill of the bandager. However, the main shortcoming is (relative) inappropriateness for patients with PAD.

Diagnosis of possible issues with arterial blood flow in the lower-extremities is, therefore, a prerequisite before deciding on (modified or non-modified) compression therapy. The easiest and most convenient way is based on the Ankle-Brachial (pressure) Index (ABPI or ABI) measured with a Doppler probe and a sphygmomanometer or an oscillometric-plethysmographic diagnostic device, which is the superior method of the two: it is user-error‑free and can perform the measurement in 1 minute [15, 16]. Regardless of the method of obtaining the result, the ABI has diagnostic value beyond PAD, but for the wound care/compression therapy provider the most important information is the presence and severity of PAD.

Intermittent pneumatic compression (IPC) systems (facilitated by an air pump unit and inflatable auxiliary sleeves) are, on the other hand, far more suitable for treatment of arterial wounds (in addition to other treatment methods) and are also suitable for treatment of venous and neuropathic ulcers. Studies have shown that they reduce resting pain and improved healing rates in patients with CLI [18]. Evidence of its benefits in management of venous ulcers is even more numerous with special emphasis on rapid-inflation, short-cycle IPCs, which are associated with even faster healing rates [19]. Lastly, IPC has demonstrated clinically significant efficiency in the healing of neuropathic ulcers [20].

However, considering all presented benefits of compression therapy, both classical (stockings, bandages, etc.) and IPC, are all or nearly all patients’ beneficiaries of such treatment? A comprehensive study conducted in the UK found that at least 31% of patients with venous ulcers included in the study were not receiving compression therapy and that an even larger number of them, around 40%, were not given an ABI assessment or it was unclear whether a recording had been taken [21]. The situation elsewhere might be different but given the fact that such a significant underutilisation of compression therapy was identified in an economically developed country with a well-organised healthcare system, it is reasonable to expect it to take place in other regions, much to the detriment of both the patient and the economy.

Proper compression therapy is an effective treatment method for chronic wounds beyond venous ulcers, but only in patients with comprehensive diagnosis of CVI, PAD and any other CVD or diabetes or any comorbid condition that might preclude its application.

[2] The Evaluation of Lower-Extremity Ulcers > https://www.ncbi.nlm.nih.gov/pmc/articles/PMC3036466/

[11] An Economic Evaluation of the Impact, Cost, and Medicare Policy Implications of Chronic Nonhealing Wounds > https://www.valueinhealthjournal.com/article/S1098-3015(17)30329-7/fulltext

[18] Effect of High-pressure, Intermittent Pneumatic Compression for the Treatment of Peripheral Arterial Disease and Critical Limb Ischemia in Patients Without a Surgical Option > https://www.ncbi.nlm.nih.gov/pubmed/26574751

[21] Opportunities for better value wound care: a multiservice, cross-sectional survey of complex wounds and their care in a UK community population > https://bmjopen.bmj.com/content/8/3/e019440

Tags: chronic woundsCompression Therapydiabetes;PADperipheral artery diseaseWound Care
Previous
Rapid Covid-19 Test Pilots Advised for Sports Events, Hospitality and Schools
Next
How To Use Balmonds Skin Salvation Cream
We use cookies to ensure that we give you the best experience on our website. If you continue to use this site we will assume that you are happy with it.OkRead More