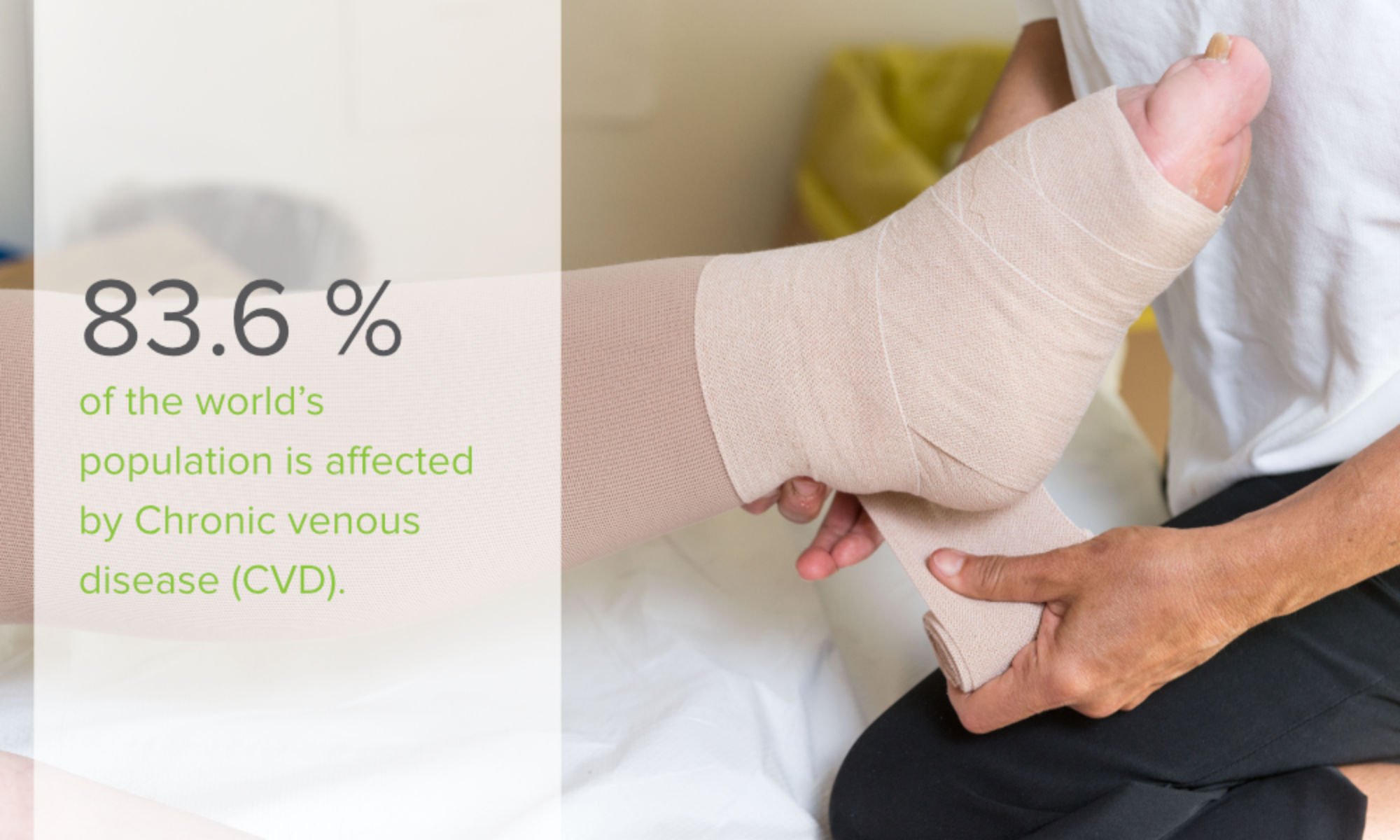 Chronic venous disease is a fairly common vascular disorder that often goes undiagnosed by physicians and other healthcare providers until the onset of complications. Proper and timely conservative management in the form of compression therapy should be used before contemplating other, more aggressive treatments.

Chronic venous disease (CVD) affects men and women about equally (although certain conditions are more common in women, others are more common in men), and it is estimated that about 83.6 % of the world’s population is affected by it [1]. As an umbrella term, CVD covers both common and relatively benign conditions such as telangiectasia (spider veins), reticular veins and varicose veins, in addition to more serious ones, such as chronic venous insufficiency (CVI) which, amongst other symptoms, manifests as (venous) ulceration. Since this paper deals with proper (conservative) management of venous leg ulcers, the term CVI is used in association with ulceration.

Why mention arterial insufficiency ulcers? Because there is significant difference in the underlying pathophysiology of both types of ulcers and required treatment methods. While those of venous origin can (initially) be managed with compression therapy, arterial ulcers are commonly caused by peripheral artery disease (PAD), which is a more serious condition and is strongly correlated with overall cardiovascular health [3].

The best cost and most time-effective method of differentiating between both is on the basis of an Ankle-Brachial Index (ABI) measurement, which can be performed in a general practice (a primary care setting).

In healthy individuals, venous pressure at the ankle level falls during physical exertion due to the action of the calf muscles and functional venous valves that prevent venous reflux. This mechanism, essential for proper blood flow, can fail due to a variety of reasons, including calf muscle failure (paralysis or damage), a failure of venous valves (due to varicose veins), damage to deep veins, venous obstruction etc. The end result is higher venous pressure, leading to chronic venous hypertension, which has a number of serious consequences, namely, venous ulceration.

The severity and progression of chronic venous disease as such is best described using the terms encompassed in the standard classification system known as CEAP, which enables better, unambiguous communication about venous issues between healthcare professionals.

The rationale behind the treatment of venous disease is obvious as even less severe manifestations have a dramatic impact on a patient’s quality of life. This is even more so with the most severe condition, CVI (venous ulceration), which has a significant economic imprint, with estimates of annual costs of more than $1 billion in the United States and between £400 and £600 million in the UK respectively [5]. One of the underlying causes of such high cost is late diagnosis of this condition, often when it already in a severe form, when compression treatment is less effective and surgery and medications are given priority.

The first line of defence in the prevention of leg ulcers and the healing of existing ones is the use of elastic and inelastic bandages and hosiery. They aid venous return (VR) and facilitate more efficient pumping of blood back to the heart, reduce pain and oedema and have a preventive effect on the recurrence of ulcers. The application of bandages or hosiery is a complex procedure, subject to the size, shape and physical structure of the affected leg, the type of bandages/material used, the amount of layering etc., and is predicated on the skill and technique of the person affixing the bandages. However, before deciding to start with compression therapy, a clinician should understand compression levels and their connection to the nature of the leg ulceration.

The level of compression should be chosen on the basis of severity of ulceration while maintaining acceptable levels of mobility within the patient’s degree of tolerance. The general consensus is that clinicians should exercise caution when prescribing compression therapy to patients with cardiac issues, neuropathy and mild PAD, while in cases of severe PAD, compression therapy should be discouraged in favour of other treatments. This leads us to the importance of ABI.

The ankle-brachial (pressure) index (ABI or ABPI) is one of the most valuable tools for the assessment of types of leg ulceration and the presence of PAD. This is especially true in cases where patients present with both venous and arterial ulcers and there is an ambiguity about the extent to which the application of compression therapy should be applied and the compression level required. Fortunately, an ABI measurement is a quick and non-invasive procedure and well tolerated by patients. There are two methods of measuring ABI, but one is clearly superior to the other when it comes to fast and easy screening of patients in a general practice.

The standard method is uses a Doppler probe and a sphygmomanometer. While reliable and accurate when performed by a skilled operator, its accuracy is greatly diminished if used by an unskilled operator or someone who performs the measurements only occasionally(6). Another major disadvantage is the time required for the entire procedure, which can be up to 30 minutes. The answer to this is the MESI ABPI MD® diagnostic device, which offers a completely automated ABI measurement in a fraction of the time, on average a 1 minute, and requires only minimal training to operate.

With the rapid adoption of MESI ABPI MD® in healthcare facilities and general practices worldwide, more and more clinicians are able to give better diagnoses of leg ulceration, resulting in better choices of treatment methods that help their patients lead happy and productive lives.